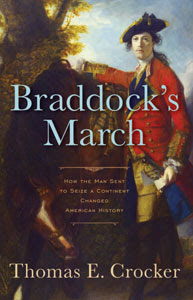 Now was the moment of decision. On the opposite bank from Gage General Braddock sat on his leopard-skin saddle pad atop his great bay charger brought all the way from England. He was flanked by his aides—including the young George Washington, disgraced for having single handedly started a war and surrendered to the French the year before (as well as sick with the “bloody flux” and barely able to sit in his saddle).

Braddock surveyed his “flying column” of redcoated British regulars. They marched with an entourage of American militiamen and wagoneers, 30 British tars, 50 female camp followers and a handful of Indian guides. They had traveled for over six months to reach this point. Their route of march slashed like a scar across the center of the American colonies. They had blazed a road where only wilderness existed. Their eight-mile long, snaking column had been cut off from civilization for months on end ... They had endured drought, famine, Indian scalpings, a near mutiny of the troops and passage through a forest so dark and silent that it was known as “The Shades of Death.” Through sheer grit they had accomplished what no one had ever done before: using ropes and pulleys and the first wheeled vehicles ever to cross the Appalachians, they had hauled across over 250 miles and seven ridges of mountains the overwhelming firepower of heavy 12-pounder cannon, naval siege guns, howitzers and mortars—a higher ratio of artillery to troops than the French, British or Prussian armies deployed at Waterloo They had breached the wilderness in a move so bold the French had discounted it as “impossible.”

At high noon and with the wave of his hand, Braddock ordered his troops to cross the Monongahela River. The crossing was a deliberate spectacle designed to convey the power and inevitability of British arms. After all, Braddock suspected that enemy scouts might be watching.

Braddock literally marched his army across the river in battle formation, with 40 regimental drums beating the “Grenadier’s March.” The ripping reverberations of the drums, a sound unaccustomed to either Indian or modern American ears, resounded through the wilderness for miles and carried down the river valley almost to the Forks of the Ohio.

The soldiers’ close-shouldered arms stood upright. Their bayonets glistened in the hot July noon sun. The oversized King’s Colour, a Union Jack with the King’s insignia, fluttered at the head of the column. Each regiment proclaimed its presence and identity with its regimental flag snapping in the breeze. The exhausted horses plunged and clattered across the pebble-strewn riverbed drawing the big 12-pounder cannon and shining brass howitzers.

As Braddock led atop his charger and surveyed the clockwork precision of the crossing, with its tight discipline, splash of color and time-honored war march reverberating off the hills, his breast must have swelled with pride at the prowess of British military might. Never before had the green-blanketed American wilderness seen such a spectacle.